We bring you an interview with the world’s famous Russian soprano Anna Netrebko with whom our fellow-writer Peter Bleha talked about the vocal changes after her son Tiago’s birth, preparing for a wagnerian debut and the patterns she uses when choosing the next role. Interviews from Anna Netrebko are very scarce, however she agreed to one for Opera Slovakia.

It is very difficult to get near the Russian soprano Anna Netrebko. She seldom gives any interviews and any reporter who can approach her is a very lucky one. Getting near her of course doesn’t guarantee she will speak to you; such a thing must be pre-arranged with the singer’s management. Usually the chances to get a positive response are next to nothing. Of course, there is nothing strange about that. The demand for the singer is so enormous, that if she did, she would spend all her days talking to people who wish to do so. Her management took a radical standpoint and they simply haven’t been agreeing to any interviews whatsoever. A rare exception to this rule does come every now and then, only to address very general matters or lifestyle choices. Her followers have been deprived from any extensive account of her work for some time now. According to Mr. Roland Tóth, who assists with the Snow Queen project, in the last year or so her management has granted a permission only on few occasions: with the New York Times, Wiener Staatsoper and ZDF TV. This Slovak manager, co-initiator of the Snow Queen opera, is obviously well-informed as he is in immediate proximity to the singer (we wrote about this project HERE…). These were all the reasons why until the last minute it wasn’t likely that this interview would eventually happen. As you can see, we succeeded. We talked about the vocal changes after her son Tiago’s birth, preparing for a wagnerian debut and the patterns she uses when choosing the next role.

Anna Netrebko in Haydn’s hall in the Esterházy palace,
Photo by Jozef Barinka

After your son’s birth, your voice was believed to have undergone a certain transformation and you found yourself looking for a new position. You surprisingly performed Lady Macbeth at The Metropolitan Opera, a character written for a dramatic soprano. Was this vocal transition rather an unexpected complication? Or would you say this was a welcome excuse to extend your scope towards more dramatic characters and expand your repertoire?

My voice has definitely changed but I could still sing all my previous repertoire if I wanted to. However, it isn’t too interesting for me anymore, since I have done that and been there in the past. I wanted to try something new. I’d become older, you could say I’d become wiser in the meantime. Naturally my dispositions had changed and therefore the dramatic (serious) roles suit me now much more.

So you regard this post-birth vocal transition altogether as an opportunity?

It is an opportunity, indeed.

Many opera singers tend to postpone taking on more difficult roles within their scope and when they finally find the courage to sing the most challenging characters, they have usually missed the point of their top shape and technically such roles are out of their reach. Then there are singers, on the other hand, who start with these demanding characters too early and damage their vocal chords. In the upcoming 2017/18 season, you will be singing Bellini’s Norma at the Metropolitan Opera, which might be a risky zone for you. Is this a sign of a very well-thought-out strategy to move on to more difficult repertoire right now – being at the top – or does it have nothing to do with such strict calculations about when to sing which particular role?

I’ve been singing for more than 20 years and during this time, if I hadn’t taken any risks, I don’t think I would have progressed. At the very beginning of my career I sang roles which weren’t appropriate for me back then. However I never pondered over those things too much, I wouldn’t mull them over. I never intended to sing difficult parts such as Traviata or Lucia di Lammermoor three years in a row without a break. I would always rotate among more difficult and easier parts in the course of my career. And I believe this shuttling among various styles and different levels of difficulty has helped me a great deal in developing my voice and my natural musicality.

So you never strategically planned which roles to sing at what age?

Nobody ever had to force me into singing any ambitious or challenging parts. For example, the role of Gerda in the opera Snow Queen which we’ve just seen is a very difficult feat, I’d say it’s quite a hard nut to crack. I myself sang this role when I was 25-26 years old. Although it was too early to sing such a hard role, I took it anyway and enjoyed it, I really loved this part.

You were approached to study Norma by Antonio Pappano. Also, Riccardo Muti convinced you to play the afore-mentioned Lady Macbeth. When making decisions about such significant matters of your career, to what extent do you rely on conductors, intendants, your pedagogue Daniel Sarge and how much of it is your own preferences?

When choosing roles, I always follow my intuition. I can always tell or feel whether I am able to sing a part or not. Another thing that matters is if I like the artwork or not. So based on these two notions I make the decision whether to pursue an act or not. But it is always very risky because I never know if I can eventually pull it off.

So despite being convinced by let’s say Riccardo Muti to study a particular work, it is your feelings upon which you decide?

It has occurred on a few occasions that music authorities have talked me into a project, I listened to their recommendations and followed the conductor or my vocal trainer’s advice. That way I ended up studying parts which I’d never thought of singing. So yes, you could say I obeyed these people and their advice. 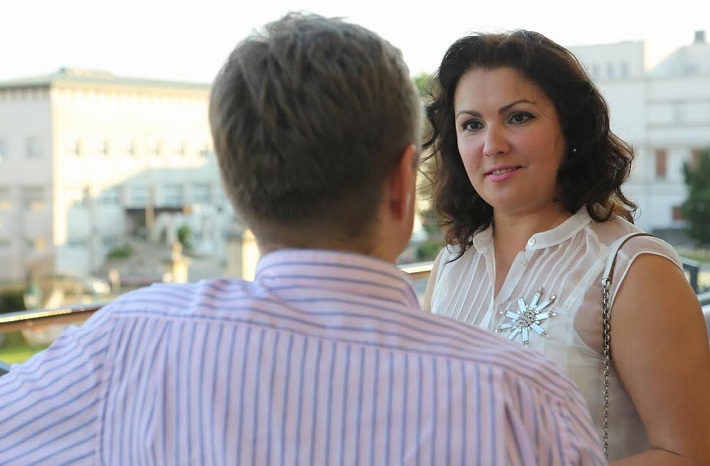 2016 will bring a novelty, when we will for the first time be able to hear you in a so-to-speak special music event – a Richard Wagner opera and you are to sing Elza in Lohengrin. You represent the “Russian singing school” in terms of singing technique. How does Russian school go together with Wagner? Isn’t that a completely different technique of singing? Are you expected to undergo a special preparation preceding this appearance?

No, I don’t claim that I merely represent the Russian vocal establishment. My technique is more of a blend. If I had solely the Russian school, I would above all sing the Russian music. I, on the other hand, sing both Russian and so-called non-Russian, plus I do sing more of the music which isn’t Russian. Let’s agree to the fact that my singing school is mixed. But to answer your question, I think the choice of Wagner is a comfortable and a reasonable one for me.

But it is a completely different singing technique from what you’ve sung so far, isn’t it?

Yes, it is. But I think despite those technical differences, the actual singing principles are more or less identical. Of course, you need to approach each role in a different way as far as technique is concerned. For sure it’s not possible to sing Wagner one day and Norma the next. There are people who can do that but I couldn’t, special vocal preparation is necessary for me. I need to adjust my voice prior to each role which takes me about one or two months. During this time I modify my settings to a certain composer. I can’t leap from one repertoire to another within one day that would be immensely damaging for both my voice and technique. Instead, if you really focus on one piece of art and keep improving it to a higher and higher level, then you can achieve a solid result, in my opinion.

So to sum this up, the technical differences between singing Wagner and for example bel canto may be overcome under the condition that you don’t sing them back to back?

As I’ve said, the singing principles do not differ in any of those. Technically speaking it isn’t the same, I take different approach to each one. Recently I’d sung Anna Bolena which is a very specific role to sing as far as technique, and within less than three weeks I sang Mimi. So, I fairly quickly returned to what I used to sing many years ago and I can honestly say I didn’t have the slightest problem with it. I can’t use the same amount of vocal volume or sound intensity, as they are completely different. But it does take a lot of time and exercise to achieve the point of being able to effortlessly shift from one singing style to another.

Do you work with different vocal trainers for different singing styles?

No, I only work with pianist Daniel Sarge. We do the whole vocal preparation together and I do the fine tuning connected with all the different styles by myself.

On a few occasions, you have complained to the media about the lack of time, supposedly you only have 10 days off in the course of the whole year and your calendar is booked for the next three years. To what degree can you decide about your schedule and how much of it is in charge of your management? Aren’t you a victim of being overloaded with work more than you wish to?

Yes, unfortunately I am definitely the victim (laughs). I am overloaded with work but I want to say that it is only my own fault, nobody makes me close deals in this way. It somehow always turns out this way.

And you aren’t fighting this?

I don’t like it and think it’s necessary to recognize when it’s the right time to rest. But I always work until I can’t stand up any more. I know it’s not right, but what can you do….

Thank you for the interview.