You are at:Home»Publicistika»Rozhovory»Simon Keenlyside: In operas, there are wonderful and powerful messages
Ľudovít Vongrej | 15. novembra 2018 Rozhovory, Sezóna 2018/2019

In his interview for Opera Slovakia, the renowned English baritone Simon Keenlyside says what does he consider important and difficult in his artistic career and civil life, about his repertoire, acting in opera, and, of course, about Rigoletto, the role portrayed by this outstanding artist on the stage of Slovak National Opera in November 2018.

When and why did you decide to be an opera singer?

When I was 23 years old, I went to music college. There I heard some wonderful student voices. There I listened every day for hours and hours in the library to great voices that made me smile to hear them. Always recordings because I was not able to go to the theatre and hear anyone “live”. Listening to so many of these fantastic singers, made me fall in love with singing and opera. I stayed in music college for 4 years and started my career at 28 years old. 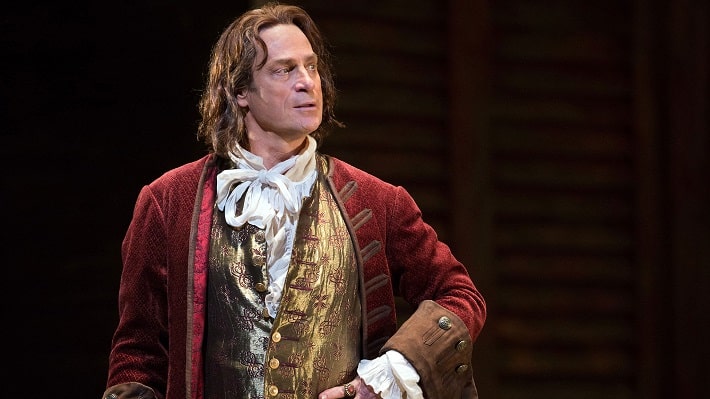 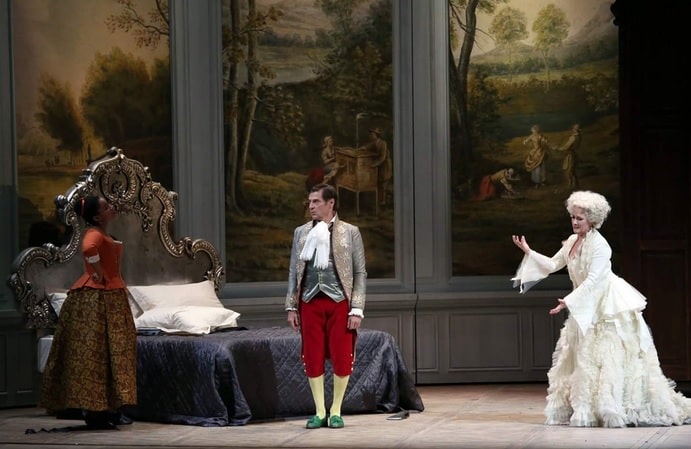 What do you consider as complicated and important in your life and the career?

Traveling and always being away from home is hard. Every young singer must understand that it always was and remains a gypsy life. That, for me, is the hardest aspect of the life. The career? It is not really in your control. You practice and work as hard as you can, to make a good voice. A reliable voice and a consistent voice. Then you work hard at stage craft/acting. And then? Well then, the rest is good fortune: good luck.

A big important opera house is NOT necessarily the best place to start. It might be? But I think that the only important thing is interesting and good work. Sometimes it is much better to work in the smaller opera houses and gain experience. The most important thing at the beginning is to get experience singing onstage.

Learning to speak the languages will help young singers to have a better time: big with their work and on the street. It is hard, but it is possible and rewarding if you don’t give up!

Now you are an experienced singer. What repertoire did you sing at the beginning of your career and how has it changed since you started?

I do not believe that the German “Fach” system is a good one. Everybody has different abilities and it is not a good idea to follow a list that someone else has compiled. I have sung Monteverdi’s baroque operas, some gentle Wagner’s roles, of course, Mozart, and some of the most difficult Verdi’s roles as well.

Some roles it is easier to address later in life. There is plenty of time. Young singers are often in too much of a hurry. A career lasts a long, long time. Some of the harder Verdi’s opera roles can be taken much later.

Also some particular roles have taken me more time to get right. Perhaps too long? The difficult Italian roles by Verdi require such an attention to the smallest details. If you are not careful then you will not get to the end of the role – the end of the opera. Learning how to find a good way through a Verdi’s role takes time. It has taken me a long time, and many times in the past I was not good enough.

I like to keep my own singing life. Varied so that I try to sing a lot of different kinds of music. I decided that I would not sing repertoire in any language that I had no window into – That I could not speak (however badly)! 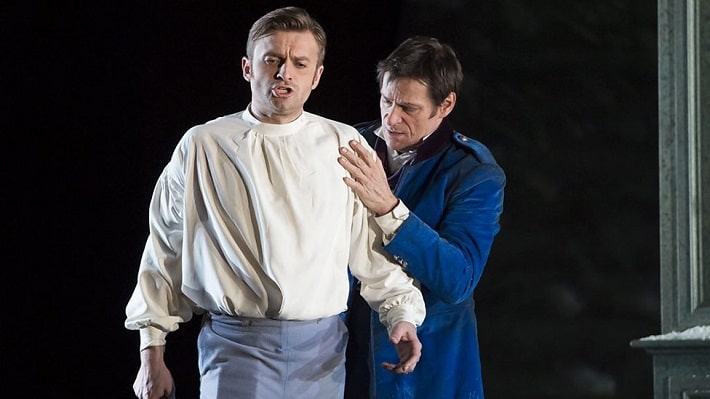 Does your repertoire suit you?

I do not know if it suits me. I am sure that I will not please everyone. I made the decision to sing Verdi based upon my study of who sang this repertoire in the past. Many lyric singers sang Verdi at the top level – and they remained lyric singers. Verdi should not be reserved only for the loudest voices. This idea is completely wrong!

Wonderful lyric singers such as Renato Bruson, Giuseppe de Luca, Gino Bechi, Tito Gobbi (?), Carlo Tagliabue amongst many, many more, sang Verdi in the greatest theatres, and sang it as well as anyone else. If you examine the score, you will see that Verdi demands colour, light and shade, and dynamics – and not always fortissimo. With Verdi it is often a question of finding a COLOUR and not just a fortissimo.

There are many various ways and different types of voice, capable of doing great justice to Verdi. I think I am not different. For me he is as suitable as for anyone else.

What repertoire do you sing apart from opera?

I divide my time between the opera and song recitals. French and German song mainly. They satisfy different parts of me. The song repertoire requires a big palette of colours and imagination. And the opera brings great joy of playing a role on the stage, and also of spending all the physical and vocal energy in my body.

I was delighted to have such an invitation to Bratislava. My challenge was to try and show Rigoletto in an honest way and as powerfully as I could to the audience. The person of Rigoletto and not just the singing. I wanted to work WITH my colleagues on the stage and not against them. I did not want to get in their way!

Rigoletto is one of the “mountain tops” of European musical theatre. WE singers are a brotherhood. WE dedicate our lives to performing these wonderful operas. It is of no consequence whether we come from Russia, America, England, France, Germany or Bratislava. We are a brotherhood of musicians who work together in our shared passion for opera. On the stage we are all equal. That is what I really think. 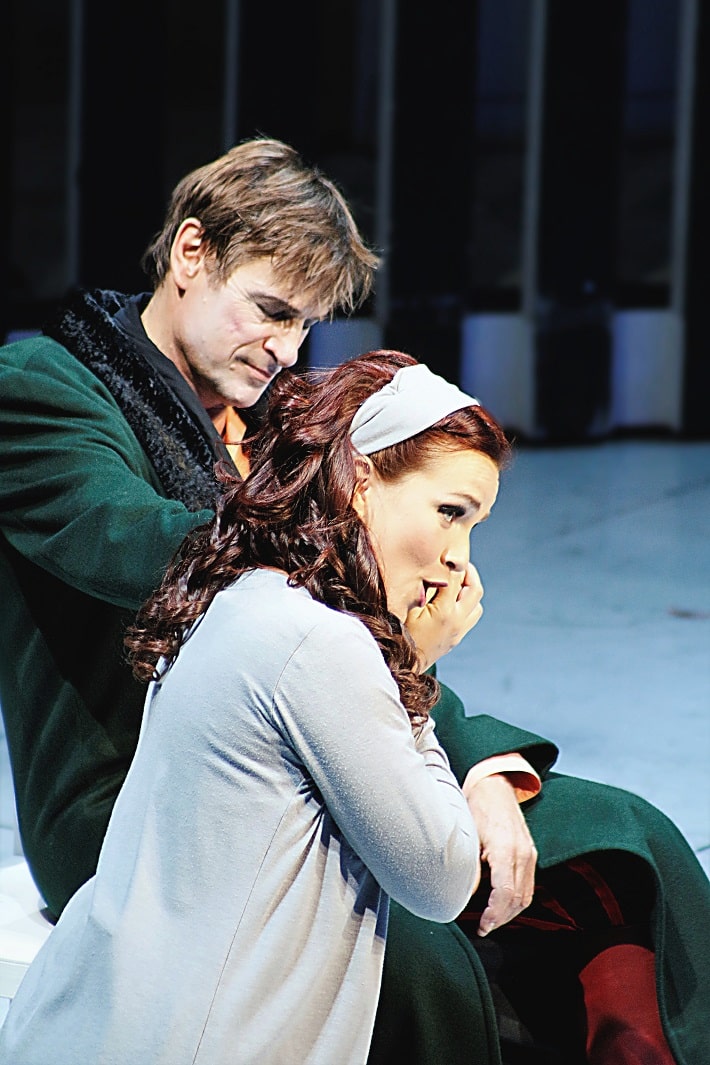 Is Rigoletto your favourite role?

Yes, I think Rigoletto is my favourite operatic role to sing. Why? Because it has everything, and tests me to the limit of my abilities. Right the edge of my abilities. I spend every last bit of my energy. My physical and vocal energy; I spend all of it in a performance and then I am tired and go to bed happy.

Good question. Well, The first thing that THIS singer will look for is a good set. We, singers want some wood. The set does not have to be ALL from wood. But if there is some wood; some reflective surfaces, then we will be happy. We want to colour with our voices. We do not want to shout all the evening, only to be heard. So that is the first and the most important thing: the set!

If you have good colleagues on a stage, you will (very likely) have a good production. For me, the set and the direction should support the libretto and NOT fight with it.

Which composer conforms to you the most?

I love good music and good operas. And I adore many composers who have written them. Apart from Verdi, I love the joy of Mozart’s da Ponte operas. I love Alban Berg’s Wozzeck, Debussy’s Pelléas et Mélisande. These are my favorites, perhaps. 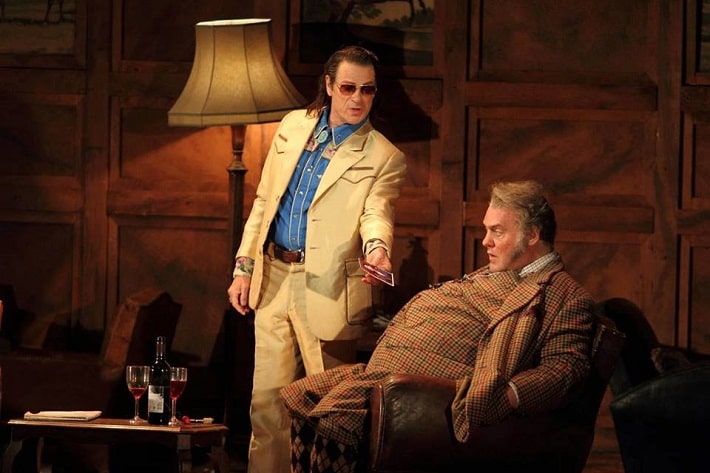 In his review for Opera Slovakia, Slovak opera reviewer Pavel Unger wrote that you “created an authentic profile of court jester and loving father, the creation loaded by emotions, free of superficial pathos and trite gesture.” What could unveil for our readers about operatic acting?

I NEVER ever read reviews, but I am happy to hear that. My only intention is to try and make a real person on the stage. I want the engine of my expression to be my voice – but also the play is equally powerful. I find these operas have wonderful and powerful messages which have much to say to a modern audience.

What do you consider yourself as the most important quality when interacting with the audience, public or spectators?

Do you work with young artists?

Yes, I do work with young artists regularly when I have the time. I enjoy discussing and working with the next generation of singers. Discussing the same things as I have considered and continue to think about and struggle with every day of my life.

What are your closest plans?

My plans? To try and fight for a better balance between work and not work. Of traveling away and going home to my little children and my family which I miss so much. Of doing so very many other things which interest me in this wonderful life. Things that are not singing. I am a curious man and there is much I want to do that is NOT singing.

Thank you very much for the interview